How can you make a difference when it comes to differences?

As an organisation, Robert Half is committed to providing employees with an inclusive culture, where we all feel comfortable bringing our whole selves to work.

Recently, our DEI Council, a supportive group within Robert Half that provides a safe environment to discuss the topics of diversity, equity and inclusion, invited two experts to share their knowledge and experience with the UK team: Wam Dawson and Catherine Garrod.

Wam Dawson is the People and Culture Director for ISS Facilities Ltd, where she sits on the UK & Ireland and European DEI councils. She strongly believes that DEI isn’t just a nice to have, but a critical business driver that is a leading indicator of a business’ ability to harness competitive advantage by enabling greater innovation, improved organisational performance and financial success, not just now but in years to come.

Catherine Garrod is the founder and CEO of Compelling Culture, which collaborates with organisations to boost experiences for colleagues, for customers and communities. She’s a great believer that if we can be ourselves at work and influence how things are done, our lives are better and we’re more creative and better problem solvers.

What are diversity and inclusion?

WD: For me diversity is about respecting and appreciating what makes people different, but inclusion is allowing people to bring their authentic selves to work and making sure that their contributions are taken into account.

CG: For me, diversity is who is on the guest list at the event, and inclusion is who is being invited to dance when they get there. The next stage is belonging, where people get to choose what music they dance to, or decide not to dance at all if they don’t want to. Diversity is a fact, inclusion is a choice and belonging is a feeling.

What is the difference between equality and equity?

CG: Imagine a fence with three people trying to see over it, and they’re all different heights: tall, average and short – and only the tallest person can see. Equality would be to give them equal sized stools to stand on and treating them all the same. However, the short person still can’t see over the fence. Equity is then giving people stalls of the height they actually need to see over the fence to create the same experience or outcome. Then if you bring it back to inclusion, the goal is to take the fence down so there isn’t a barrier in the first place. 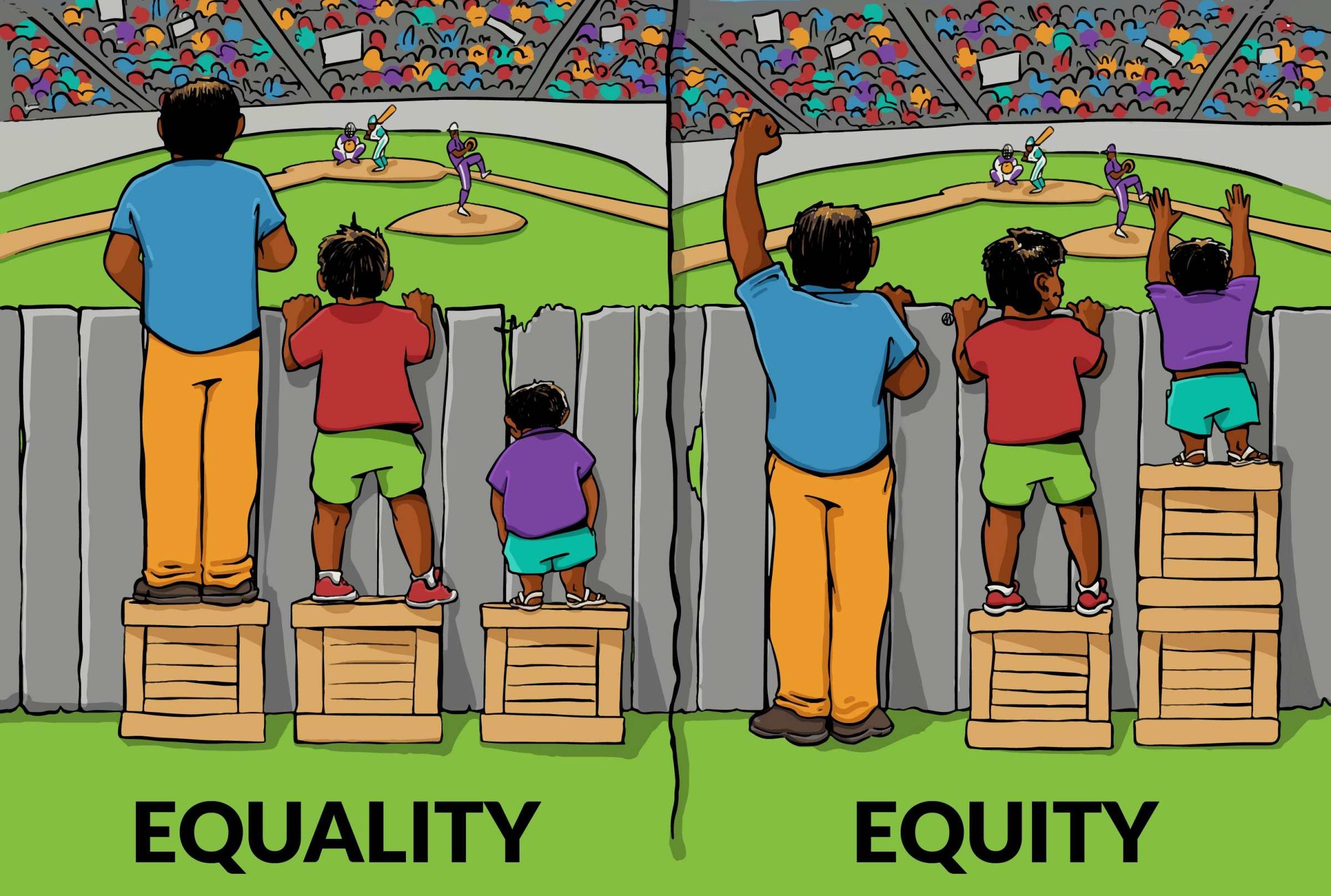 WD: I’m in HR so I’ll give a recruitment example. If you’re recruiting for a role and as part of the solution you want people to prepare and present a 20-minute case study – it seems fair, right? But if one of those people had for example, dyslexia and the other did not, you’re treating them fairly but not equitably. In order to ensure equity, you might need to give the person with dyslexia a little more time to actually read the case study, so you’re bringing them both to the same level.

What does it mean to have a diverse and inclusive team, and why is it so important now?

CG: It’s important to have diversity in the room when you’re making decisions about people – and I’m not just taking about protected characteristics. A good mix should also include things like educational background, income, lived experience and where you’ve grown up.

But having people in the room isn’t enough – inclusivity is who gets to talk and whose opinions are heard. There’s a fairly shocking statistic that says 30 per cent of people can dominate 80 per cent of the conversation when you’re in a group, unless you manage it.

WD: Having a diverse and inclusive team gives you a competitive advantage from the offset, straight away, because you have a mix of people. If you are in a meeting room and you are making a massive decision, but you all look the same and think the same, you don’t know that you are making the right choices. You are probably missing out on 50 per cent of the population, which could help you to make better decisions – but also come up with better ideas.

What are the traps that people and organisations fall into?

WD: Organisation will often hire a DEI leader and tick the box. But how far away is that person on the org chart from the CEO? If they are 10 levels down then that company doesn’t care. I would say a DEI lead needs to be a maximum of two to three steps away from the CEO.

The other thing is the budget for DEI. You have the lead but what are they going to do? Do they have a budget for events, initiatives and training for example? All of that needs to happen, and often companies fall into the trap of not thinking about the bigger picture because they are focusing on ticking the box.

CG: Organisations aren’t very good at using data to measure if what they’re doing is working. People tend to get really passionate on this subject and they will get involved and lead the agenda, but that in itself isn’t enough. If all of those passionate people stopped, would progress stick?

Organisations need data to see if what you’re doing is really working, and they need to embed changes into policies, processes, systems and decision making. It also needs to be linked into organisational ambition and ESG strategy – if DEI isn’t tied into those things it will always be a weak point and can end up creating fatigue in the organisation, and the passionate people stop trying. Then there’s a real risk that progress will stop.

The best way to measure inclusion is to see how valued, heard and involved people are and you can usually use existing questions in an engagement survey. Questions about empowerment, recognition, believing action will be taken on results are great examples – it’s better to ask questions about personal experience rather than DEI specifically. Then disaggregate the scores by demographics to see what’s really happening.

WD: Another point would be focusing on employees. You can have a diverse mix of people, but when you go up to those management levels, do you see that level of diversity at the top? Another trap would be to focus on gender at senior management level – but gender isn’t the only thing, there is so much more to diversity than that.

What’s the one thing that we could each do to positively impact DEI?

WD: Empathetic leadership is really important. Imagine a time when you felt embarrassed or pushed to the sidelines, or when you’ve been making a really good point in a meeting and someone interrupts you because they have a bigger and louder voice. I’m sure you’ve all experienced that and you know how you felt at that particular point, so you have to ask yourself, ‘is this happening in my team?’ And if it is happening, ask yourself ‘what can I do so it doesn’t happen?’ You could be the empathetic leader who says ‘wait a second, this person is trying to say something here’. Slowly that can have a positive impact.

CG: I think organisations sometimes put too much influence on ‘fixing’ underrepresented groups, whether that’s through a women in leadership programme, or a programme for people with mixed heritage. There is a place for it, but it is also important that the overrepresented groups know what they can do every day to create more equitable experiences for everyone and more equitable outcomes.

Robert Half’s DEI Council raises awareness of DEI matters within the organisation and to help the business take tangible, practical steps to ensure that people can thrive at Robert Half regardless of our differences and so that our employee community truly reflects our customer base. The Council provides counsel and promotes action for positive change, which helps the company to really live its diversity and inclusion values through its hiring practices, training and communications.

Click here to find out more about working at Robert Half