You have probably heard about IR35 – the legislation that was introduced to tackle perceived tax avoidance. But what exactly is IR35, how will it affect you and what should you be doing to prepare for its introduction in the private sector?

IR35 is the short name used for the “off-payroll working rules”, which is anti-avoidance tax legislation. These rules were introduced to address perceived tax avoidance by individuals seeking to avoid paying employee income tax and national insurance contributions by supplying their services through an intermediary and paying themselves in dividends.

IR35 requires workers who for all intents and purposes work like employees, but provide their services through an intermediary, pay similar taxes to other employees.

The most common form of the intermediary through which workers provide services is a personal service company (PSC); however, an intermediary can also be another type of company, partnership or an individual.

When was IR35 introduced, and who does it affect?

IR35 is nearly 20 years old and started as a press release from the Inland Revenue (now HMRC) following a statement by the Chancellor in the 1999 budget, and the legislation was introduced in April 2000.

As of 6 April 2021, the existing off-payroll working rules will be brought into line with the public sector such that medium and large organisations in the private sector will be responsible for assessing the employment status of the contractors they engage. Originally expected 6 April 2020, Chief Secretary to the Treasury, Steve Barclay announced on 17 March 2020 that IR35 reforms would be delayed.

What does the IR35 legislation mean for organisations in the private sector?

If the end client is a medium or large organisation, engaging a worker via an intermediary on a temporary basis, it will need to determine (and provide reasons for its decision) whether the worker would be regarded as an employee for tax purposes if they had been directly engaged.

Key factors influencing an “inside” or “outside” IR35 determination: While the responsibility for determining a worker’s employment status lies with the end-client,  HMRC have provided an online tool called the Check Employment Status for Tax (CEST), which will assist clients in their determination. The use of this tool is not compulsory; however, HMRC will be bound by the outcome unless it has been obtained fraudulently.

CEST asks a number of questions about the nature of the relationship between the worker, the intermediary and the client. Once completed, it provides an assessment of employment status. If the worker is classified as an employee for tax purposes the party that pays the intermediary must make deductions for income tax, national insurance and the apprenticeship levy.

Some of the factors that have been outlined by HMRC in making this determination are as follows:

•    The nature of the duties being undertaken – is the job one that you would expect to be done by an employee? Are there current employees performing a similar role? If so, this could increase the likeliness that the assignment falls under IR35 rules.

•    Substitution – does the limited company who provides the worker have the right to send a substitute to carry out the role without requiring approval from the end client?

•    Mutuality of obligation – Does the worker have the right to reject work from the client?  Or is the client obliged to provide the worker with work?

•    Supervision, direction and control – To what level is the worker dictated as to how they should perform the day-to-day tasks for the assignment? Are working hours mandated? If the level of control is considerable, it could increase the likeliness of the role to fall inside IR35.

•    Integration into the business – to what extent is the role an integral part of the company? Does the provider present themselves to customers as representing the business? Does the worker have managerial responsibilities? Again, if they do, the worker is behaving more like an employee.

•    Is the worker entitled to employee benefits such as pension contributions, paid holidays, sick pay? If the answer is yes, they are being treated like employees and are more likely to fall inside IR35 rules as a result.

HMRC’s guidance stresses that the factors it lists are not exhaustive and that the overall picture must be looked at to determine employment status.

HMRC has provided two example scenarios within their consultation to illustrate how these factors will impact the determination: 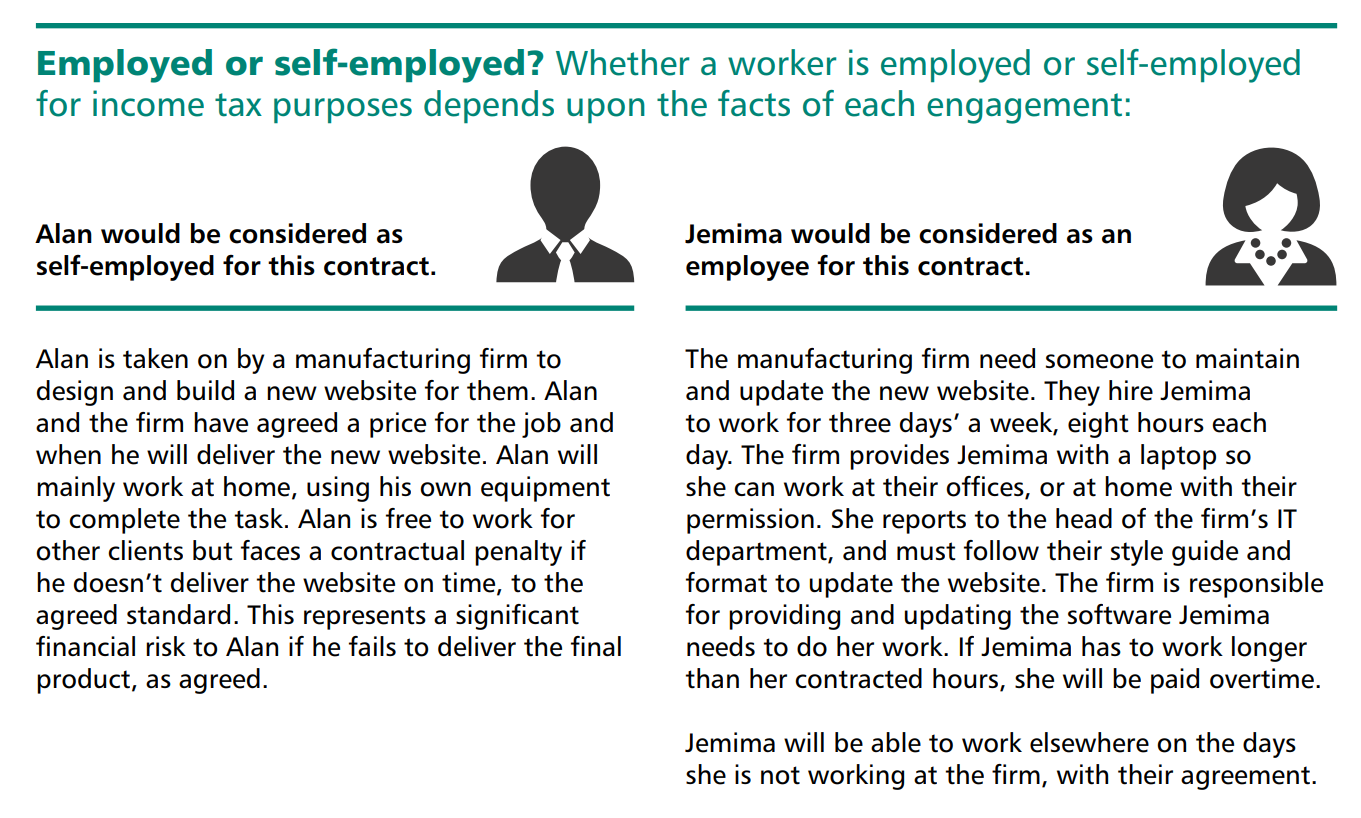 What actions do clients need to do before April 2021?

Whilst the proposed changes are significant, the final legislation has not yet been published and therefore, whilst we cannot provide a list of definitive actions, we would recommend that clients who are large and medium organisations:
•    Review the HMRC guidance for private sector off-payroll working for clients to gain a deeper understanding of the requirements.
•    Audit its workforce to determine reliance upon workers providing services via an intermediary.
•    Consider how the information required to make a status determination statement is collected.
•    Establish a process for making a status determination statement and for providing these to the relevant parties.
•    Prepare a status determination dispute process that will comply with the specific requirements.

Disclaimer: We have provided this for general information purposes only and does not constitute legal advice. For specific tax advice, please refer to your Accountant, Legal advisor or HMRC.

How to conduct a skills audit with your employees

Find out what goes into the skills audit process and support your business’ digital transformation projects with the right workforce and employee skill...

What should I do if I don’t hear back after a job application?

Are you wondering what to if you haven't heard back from a job application? Don’t worry - we have plenty of advice for jobseekers waiting on that dream...

Demand for tech talent is at an all-time high, with the tech industry being one of the most sought-after in the world. Learn how to gain an edge and attract...