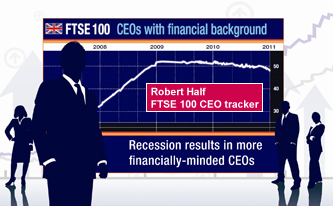 London, 26 April 2011 – It appears that finance skills are key to becoming a leading CEO, findings from the annual Robert Half FTSE 100 CEO Tracker reveal. Nearly half (49 per cent) of serving Chief Executive Officers (CEOs) in the current FTSE 100 Index have financial backgrounds*, compared to only 31 per cent in 2008*.

Of the 9 FTSE 100 CEOs who have been appointed over the past year, six leaders (65 per cent) have financial backgrounds, including Andrew Harrison of Whitbread and Nicandro Durant of British American Tobacco who have both held Finance Director roles in their career.

“As the economy continues to improve, we are seeing an increasing demand for leaders with a strong financial skill set to guide organisations through a challenging operating environment and drive competitiveness so they emerge a stronger, more capable business”, said Phil Sheridan, Managing Director for Robert Half UK. “This renewed significance in fiscal expertise reflects the increasing regulatory environment and need for accountability for the numbers behind the business.”

Although diversity amongst the FTSE 100 has come a long way in recent years, looking back at last year’s results, the 2011 research suggests there has not been an improvement at the C-level. This is especially prevalent when it comes to gender, nationality and age.

The number of women making the top position in 2011 has remained unchanged, with four at the top for both years. However, the number of CEOs under the age of 45 has increased from 4 per cent to 6 per cent over the last year, indicating that a higher number of younger professionals are making their way to the top.

While the majority of CEOs are British nationals, the remaining leaders come from a wide range of countries, including the United States, Mexico, Syria, India and South Africa. The youngest FTSE 100 CEO is still Oleg Novachuk who, at only 39, runs the copper mining company Kazakhmys. Jaime Lomelín of Fresnillo, who has been at the helm for over 20 years, retains his title as being the oldest CEO in the FTSE 100 Index, aged 75.

Seven of the FTSE 100 CEOs hold titles including Dame Marjorie Scardino of Pearson, the international media and publishing company, and Sir Martin Sorrell who also holds the accolade of longest serving FTSE 100 CEO.  Sorrell, of advertising and communications giant WPP, has been at the top for nearly 25 years.

Sorrell is also one of a clutch of FTSE 100 CEOs who attended the elite halls of Oxbridge. With a 2 per cent improvement on last year, 21 per cent of current CEOs attended either Oxford or Cambridge, with the vast majority of the remainder holding some form of higher education qualification.

Robert Half is the world’s first and largest specialised recruitment consultancy and member of the S&P 500. We have once again been named to FORTUNE’s “World’s Most Admired Companies®” list and remains the top-ranked staffing firm (February 2020). Founded in 1948, the company has over 300 offices worldwide providing temporary, interim and permanent recruitment solutions for accounting and finance, financial services, technology, legal and administrative professionals. Robert Half offers workplace and jobseeker resources at roberthalf.co.uk and twitter.com/roberthalfuk.